During my 25 years of professional experience as a multidisciplinary creator and academic, I have integrated tools utilised in graphic novels, the visual arts and performance art, as well as historical, ethnographical and sociological research. My output, past and ongoing, has experimented with the possibilities of blending graphic mediums with history and music.

Film Studies
Being a self-taught multidisciplinary creator, I initiated my formal studies as a mature student. From 2008 to 2010 I studied Film Editing full time, which included extensive training on script writing, film theory and history, film direction, etc., achieving an ISCED Level 4 degree in Film Editing. My academic focus during this period was on the three-act structure and the hero’s journey and discovering ways of incorporating these staple script writing techniques to my moving image and graphic novel work. 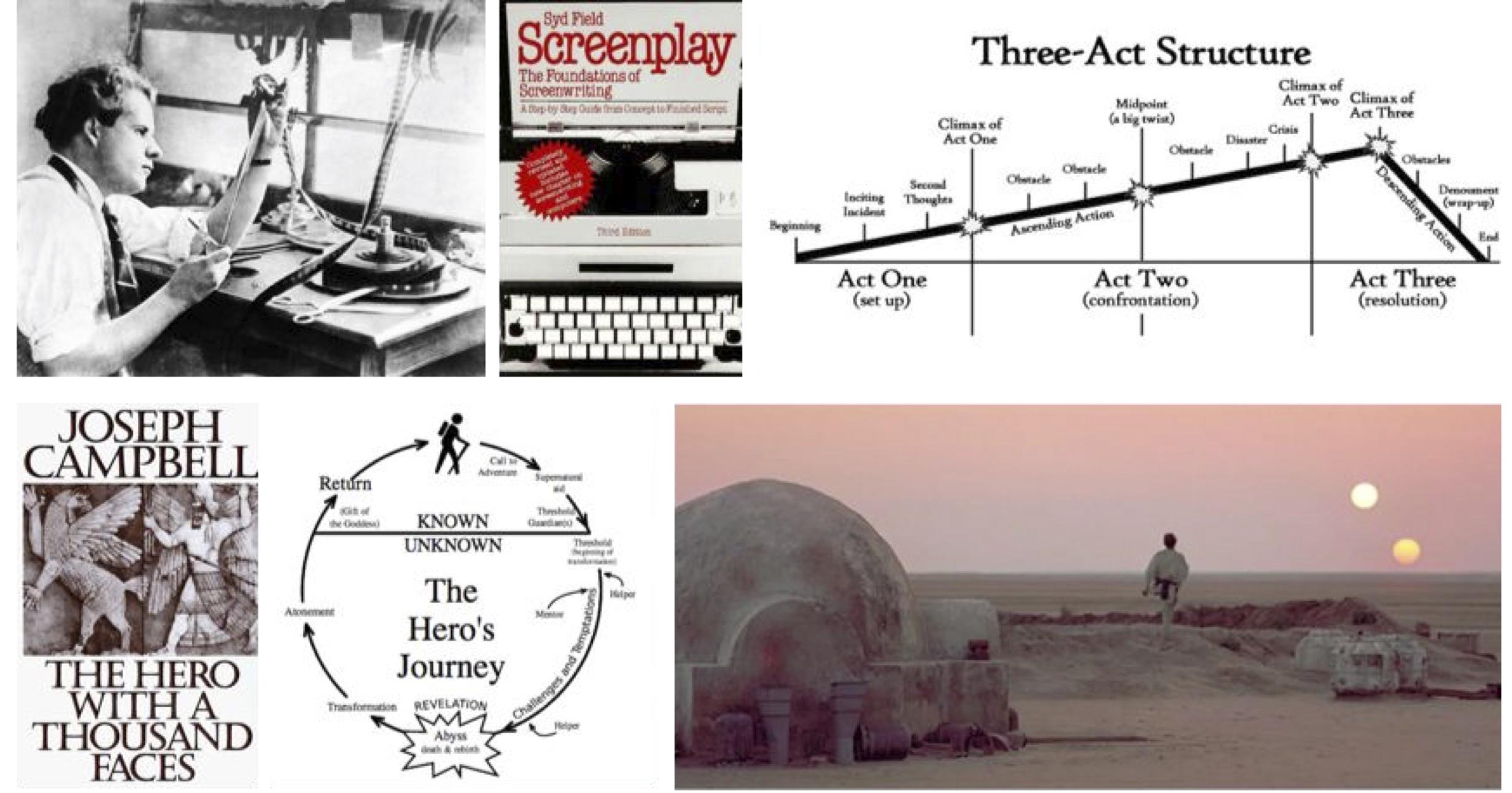 BA (Hons) Graphic Design
University of Brighton
In 2011 I enrolled on the BA Graphic Novels course at the University of Brighton, in the UK, completing my three years of full time studies in 2014 when I earned my BA (Hons) in Graphic Design. My practice-based output during this period focused on blending typography and graphics with sociopolitical history and current affairs. 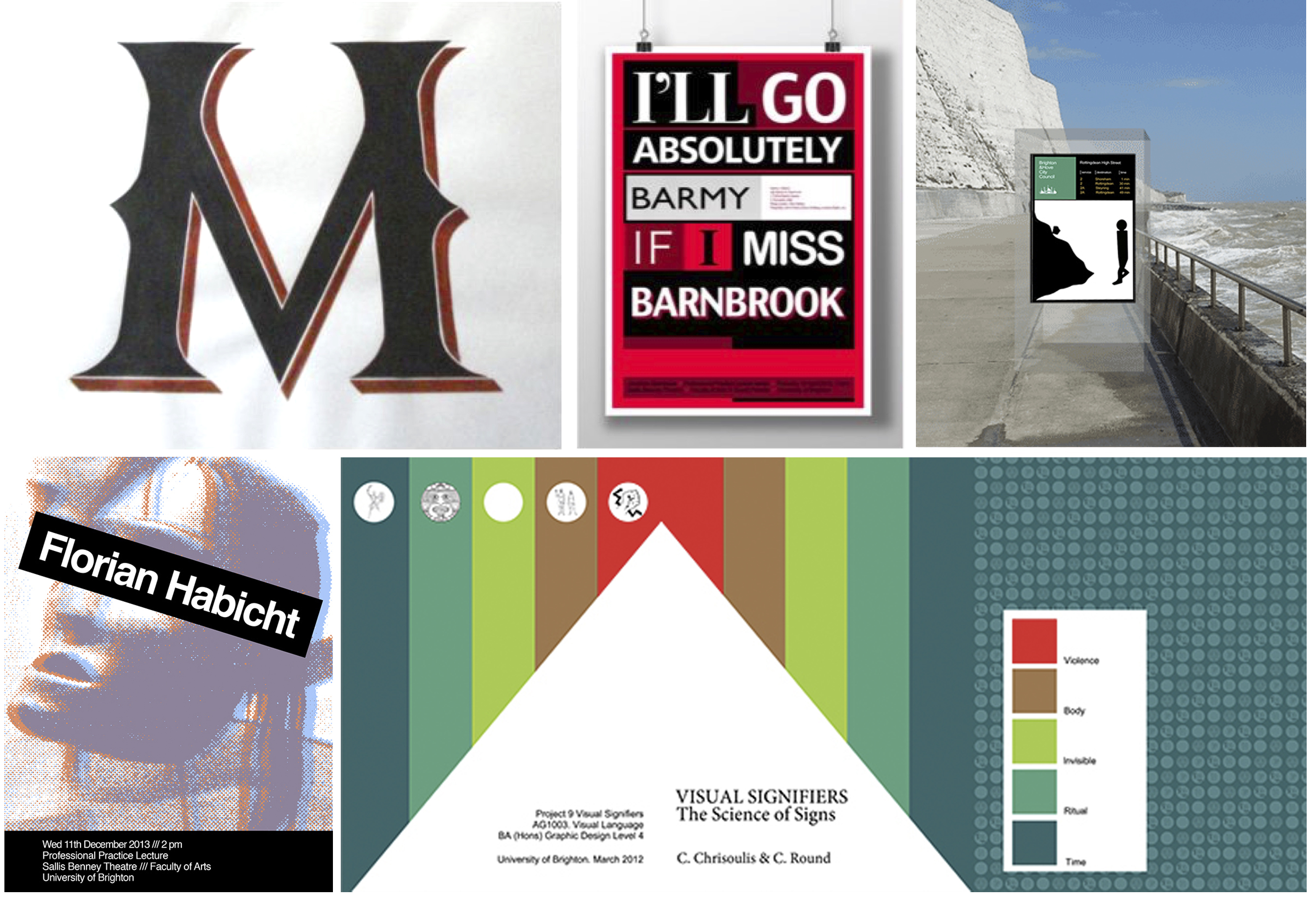 In 2012 my Power of Print cover was a finalist in PrintWeek magazine’s cover competition which ran during my BA (Hons) Graphic Design studies and was themed around the future of print. PrintWeek is the UK’s leading title focusing on the printing industry. 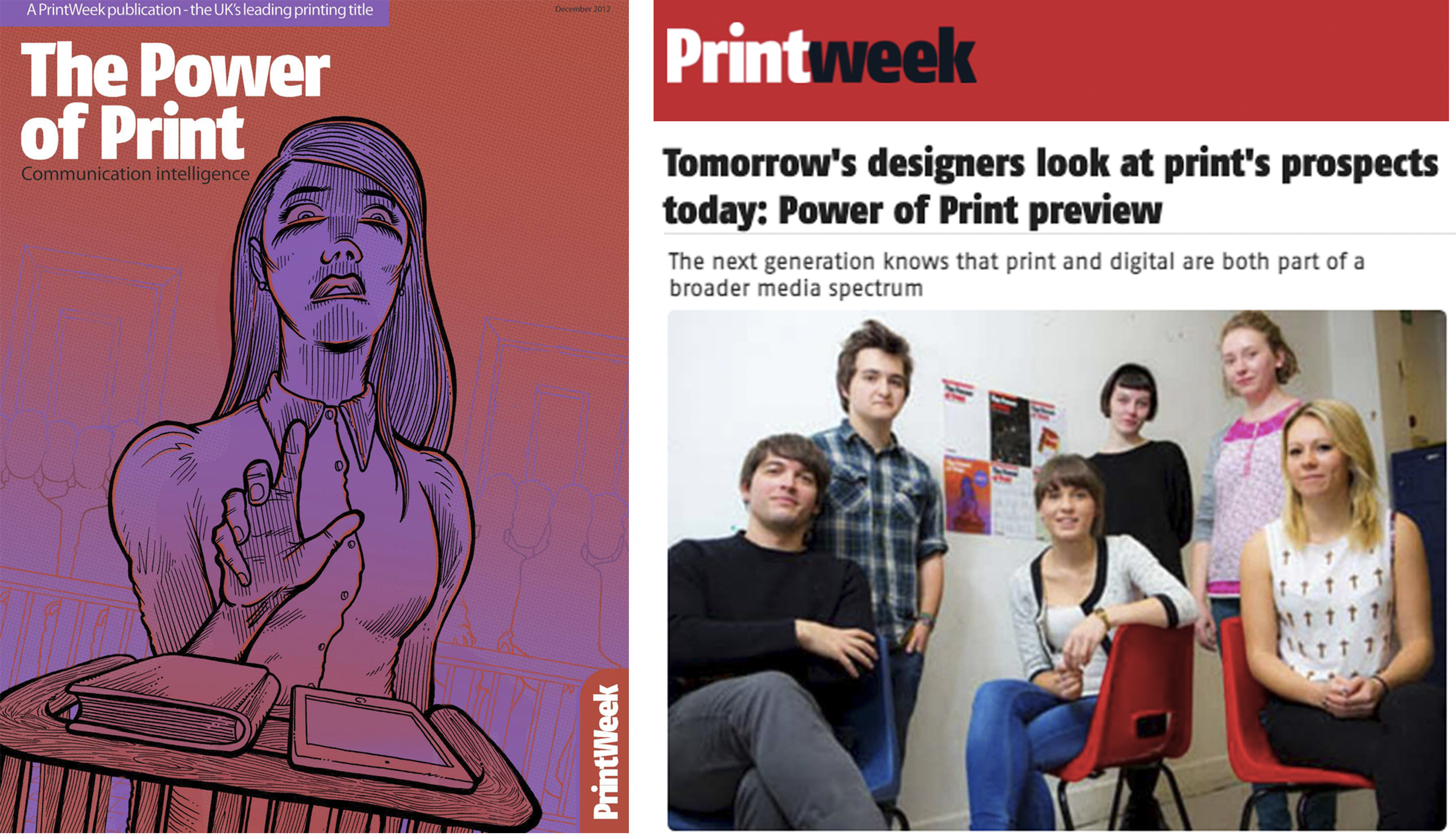 In 2014 my video Emergence Emergency, which was created during my BA (Hons) Graphic Design studies, was selected and shown at Latitude Festival’s Big Screen.

My cultural and critical theses during my BA (Hons) Graphic Design studies focused on the themes of surveillance, postmodernist style and the representations of androgyny through the theatrics of 1970s glam rock. 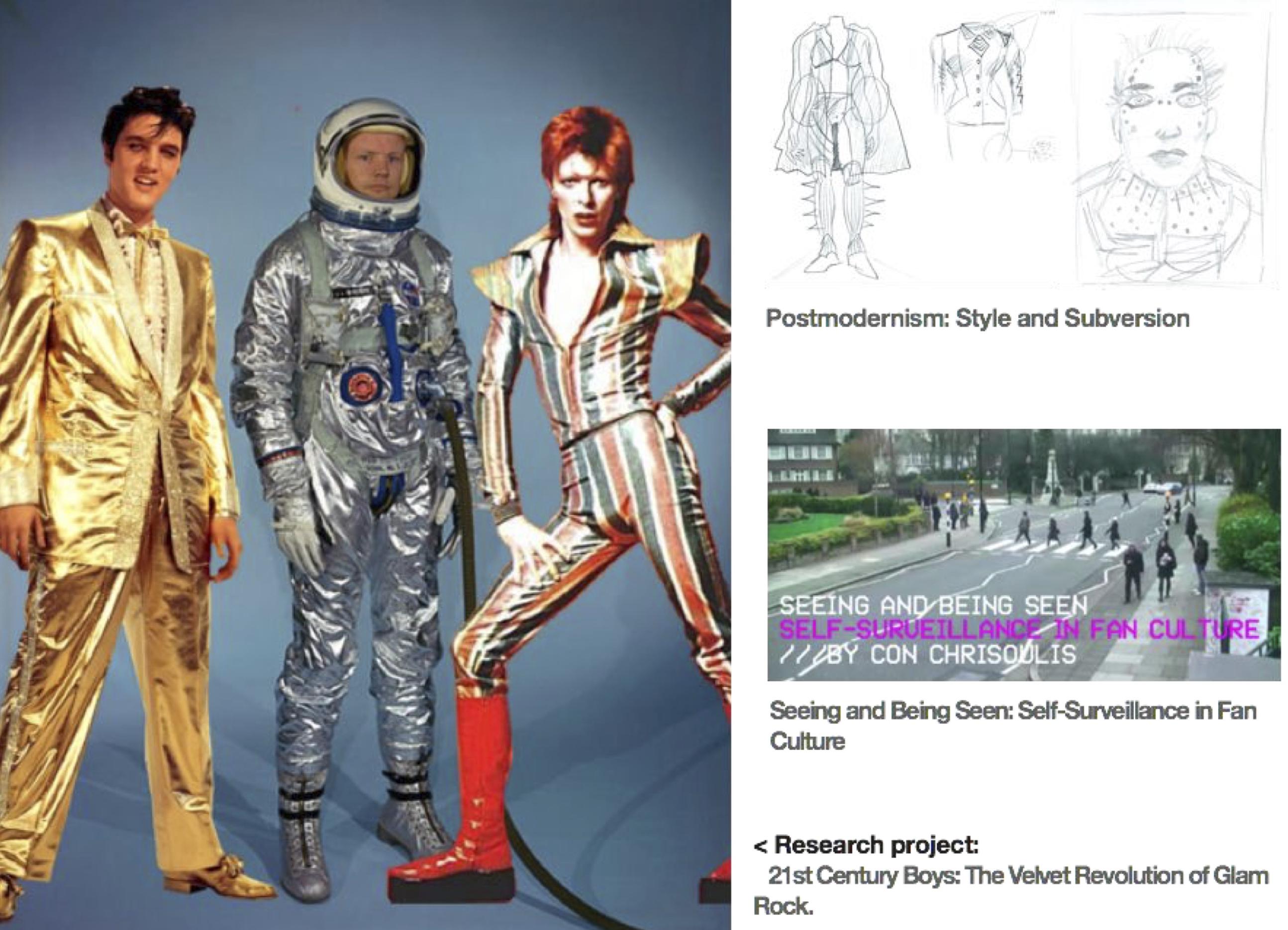 MRes Arts and Cultural Research
University of Brighton
Upon achieving my BA (Hons) in 2014 at the University of Brighton, I began my Masters of Research (MRes) studies in Arts and Cultural Research and in 2015 I was awarded with my MRes degree. During the practice­-led research, I organised workshops, presentations and coordinated a team of participants that experimented in community­ generated comics via an online interface that I personally designed. The research brought to light issues of authorship through community­-generated narratives via visual media. 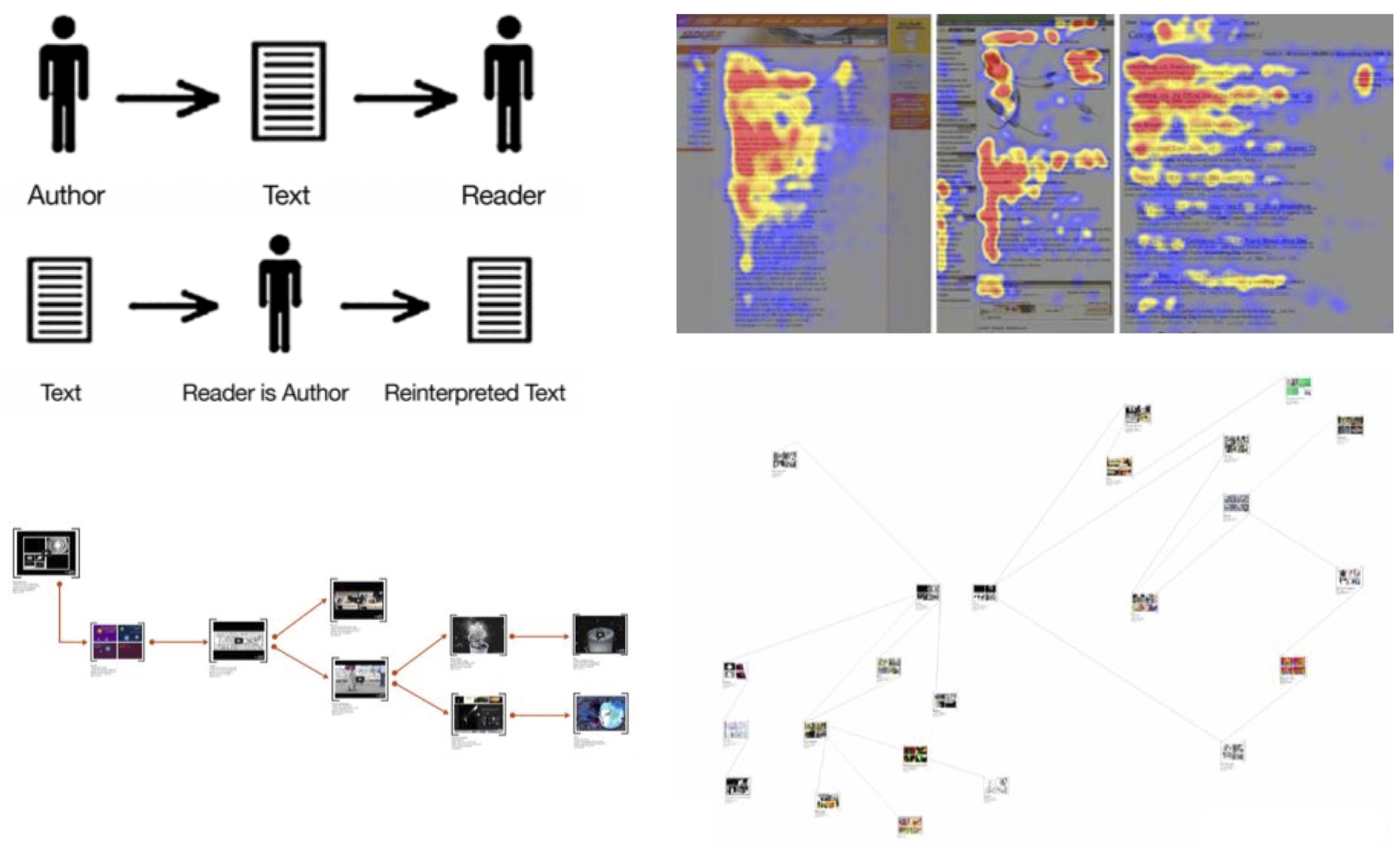 Upside Comics workshops
From November 2015 onwards, I participated as a trustee and workshop leader of the Upside Comics charity, which helps children in East Sussex, UK, fight illiteracy through the creation of comics. 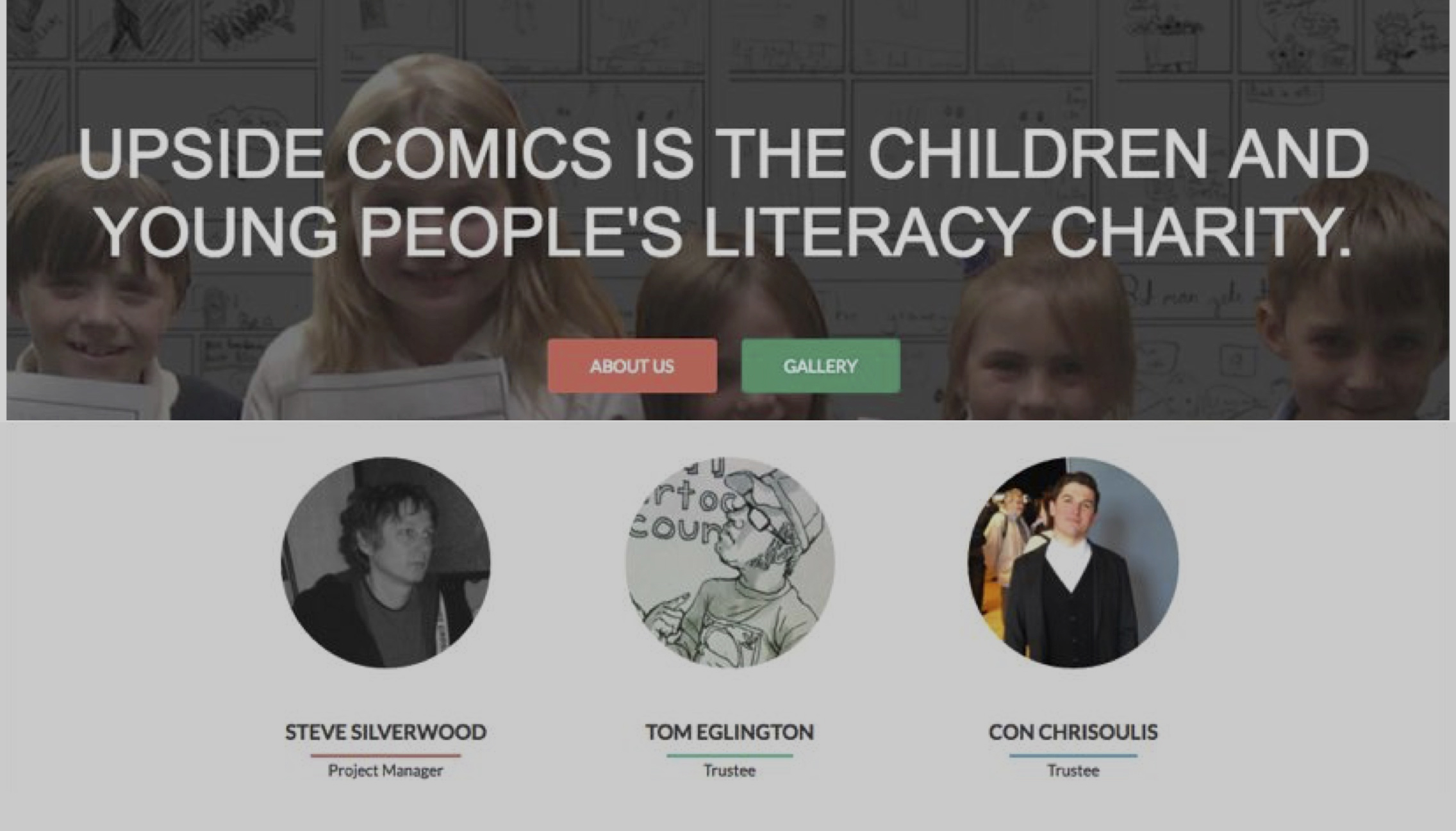 Due to my multidisciplinary, and multipublished, professional background, in the past four academic years I have personally led, as module leader, several industry-focused modules at Teesside University’s School of Art and Design that are designed to inspire and support the development of students as practising creatives.

I have also supported, through weekly seminars, the below joint BA Concept Art, BA Media Studies, BA Game Design and BA Film Studies modules:
– Visual Perspectives, focusing on the interconnectivity of art and media through lectures and practical seminars.
– Visual Iconography, focusing on developing a vocabulary of creative and visual concepts that can be used to underpin a student’s work.

PhD by Completed Works
Teesside University
I am undergoing my PhD by Completed Works (PhDCW) at Teesside University and I am currently writing my commentary on the five submitted Completed (and published) Works: Tales of the Smiths, Dryland, Ghosts of Future Past, King and Rebel Rebel. My PhDCW commentary focuses on validating non-fiction sequential art and performance art as research tools and effective forms of research output.
I estimate that my PhD commentary will be completed in Autumn 2021.

In 2005 I wrote the lyrics and music and illustrated my first concept album, Autodivine. It was performed live, and in character, in its entirety in Athens’ major independent music stages from 2005 to 2010—from AN Club to SIX D.O.G.S. 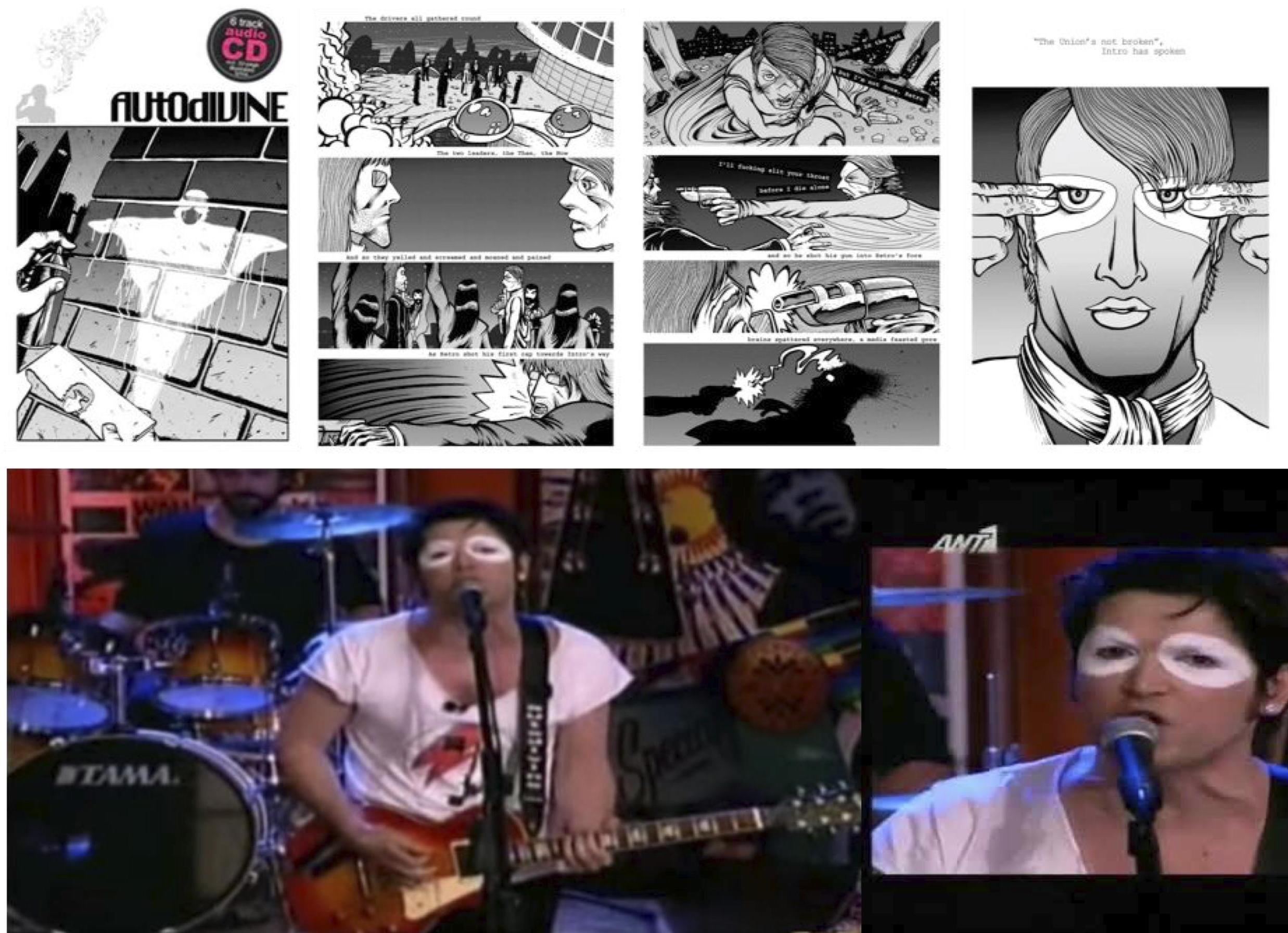 The concept album was published in sequential art form in late-2009 and was distributed to all major bookstores in Greece, whilst also being made available online through all major online outlets. The band received attention from mainstream and independent press, whilst songs of the album were performed on the popular late night TV show Radio Arvyla.

In 2011 I formed the Brighton UK-based band Ghosts of Future Past. Having written the lyrics and music to a new concept album 19X84, I illustrated the concept album and the band performed the entire narrative live in the East Sussex area from 2011 to 2015. The group’s eponymous concept album was released in the UK in 2014. 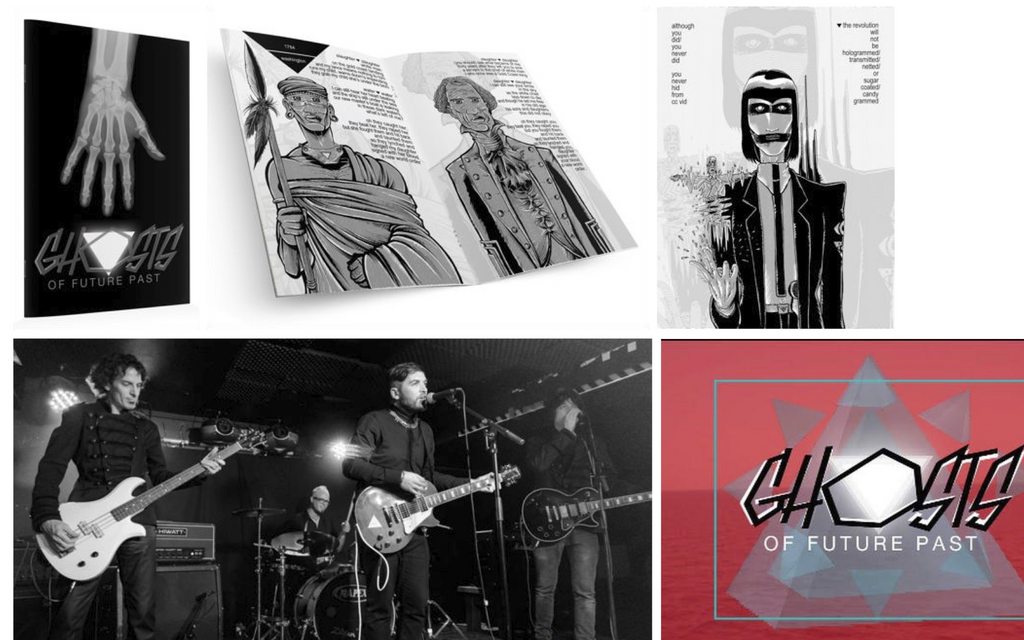 In the late-’90s and early-’00s, I worked as a studio assistant on renowned fine artist Vassiliki’s La Cité des Jeux project that was exhibited worldwide. 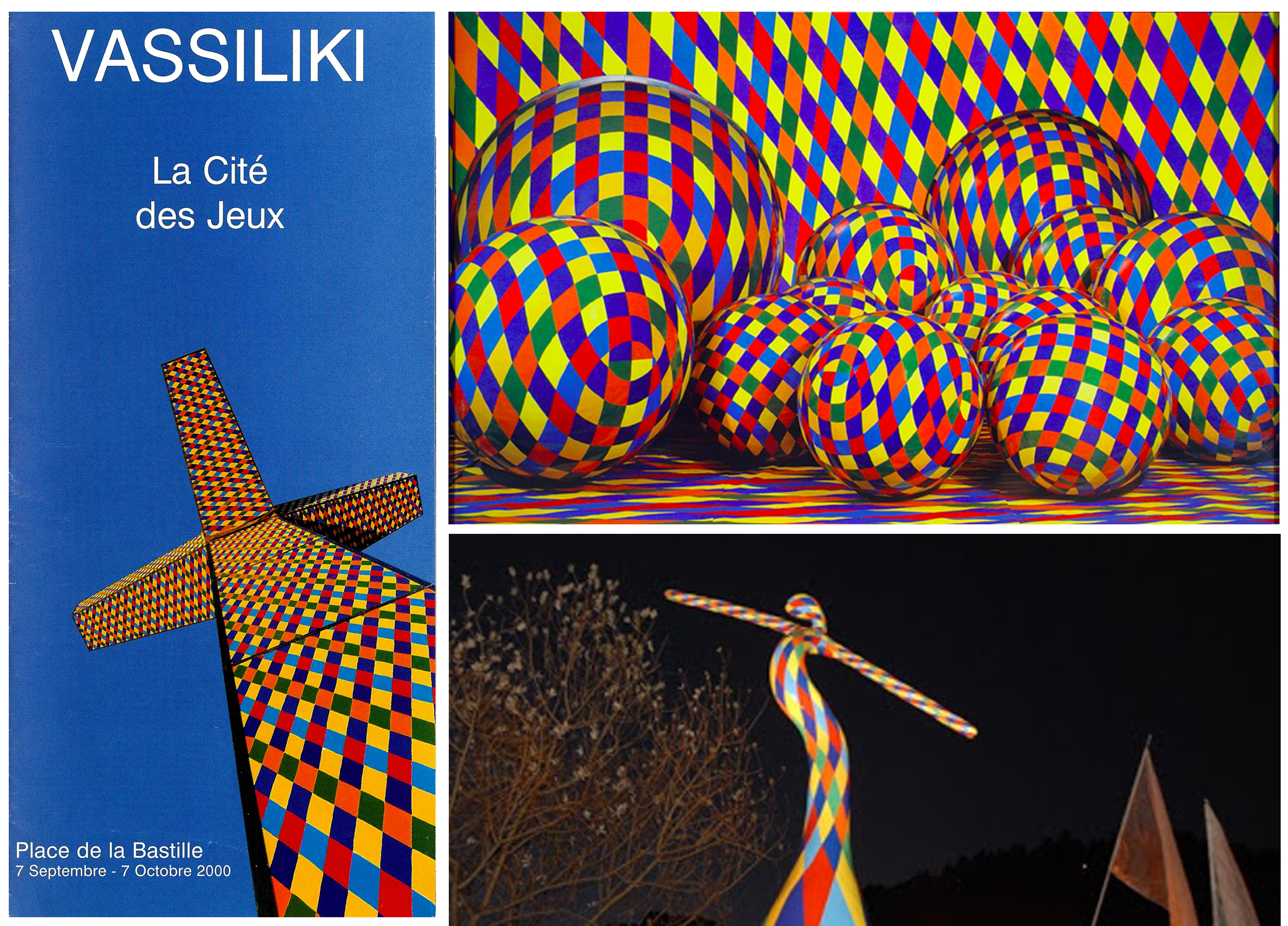 In the past I have worked extensively as an in-house graphic designer for companies ranging from the leading vehicle diagnostics firm AVS Automotive to UK luxury home appliance makers Dualit. 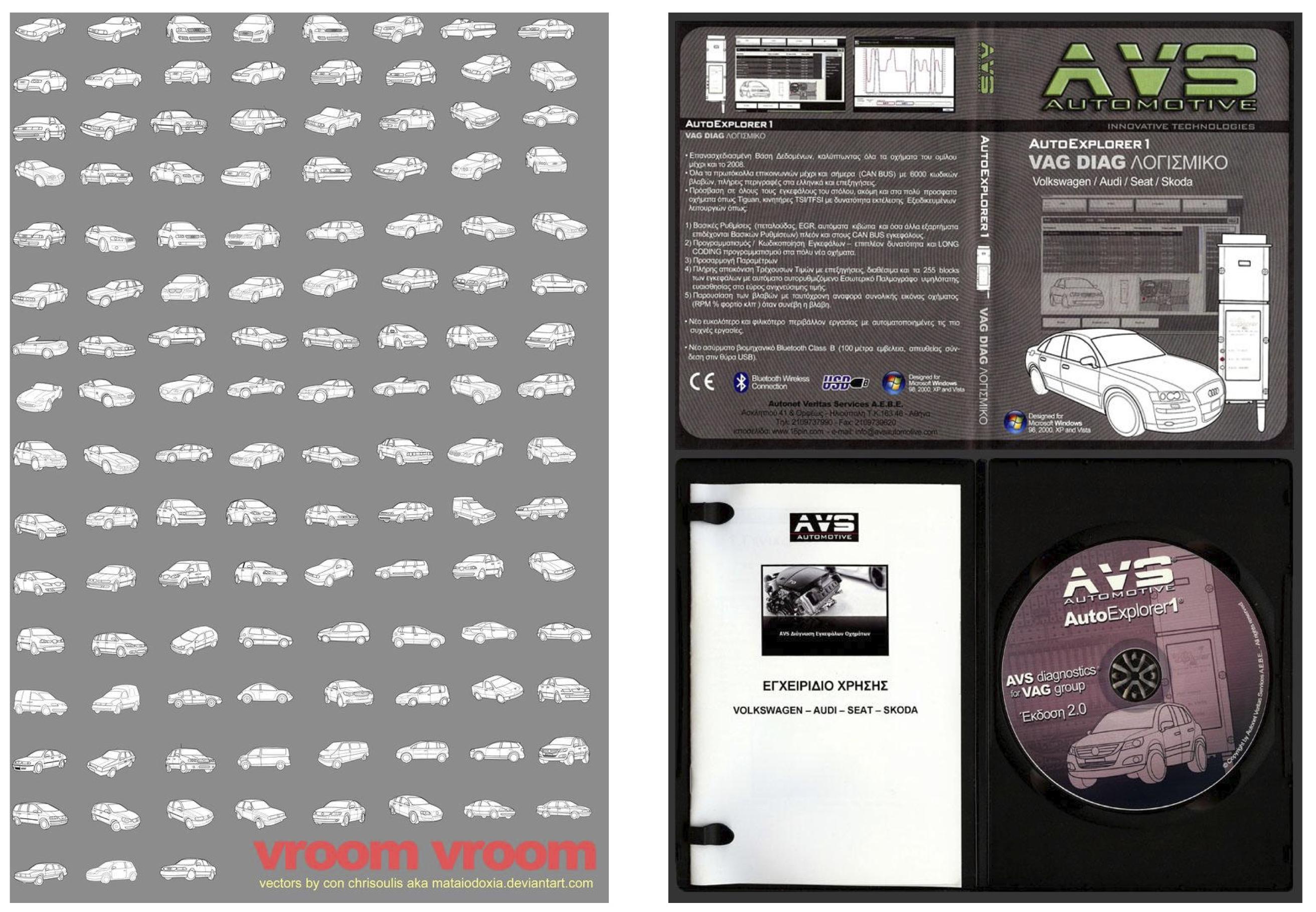 From 2008 to 2010 Big Fish magazine, a supplement in Greece’s biggest selling Sunday newspaper, Proto Thema, commissioned a series of editorial illustrations for their Sunday supplement.

Between 2011 and 2012, I worked closely with Professor Marie­-Bénédicte Dembour on a series of  illustrations based on the professor’s Four Schools of Discourse theory, a lecture series that was delivered at Amnesty International in the Netherlands. The artwork won the People’s prize at the University of Brighton’s Poster Design Competition.

From 2016 to 2018 I collaborated with the International Federation of Red Cross and Red Crescent, helping in their communication needs with the refugee crisis in Greece, via commissioned illustrations and graphics.

In 2013 I was commissioned to animate the music video for ‘Dirty Cash (Money Talks)’ by renowned DJs Thodoris Triantafillou & CJ Jeff feat. Nomi Ruiz — which currently has 420K views on YouTube.

I have designed and curated a series of arts and cultural websites and I am currently the art director and social media manager of Museums News, which focuses on museum and exhibitions culture. I have an invested interest in museum culture having studied a series of museum-based modules as part of my MRes studies and through my participation in the British Council’s museum digital tools program. 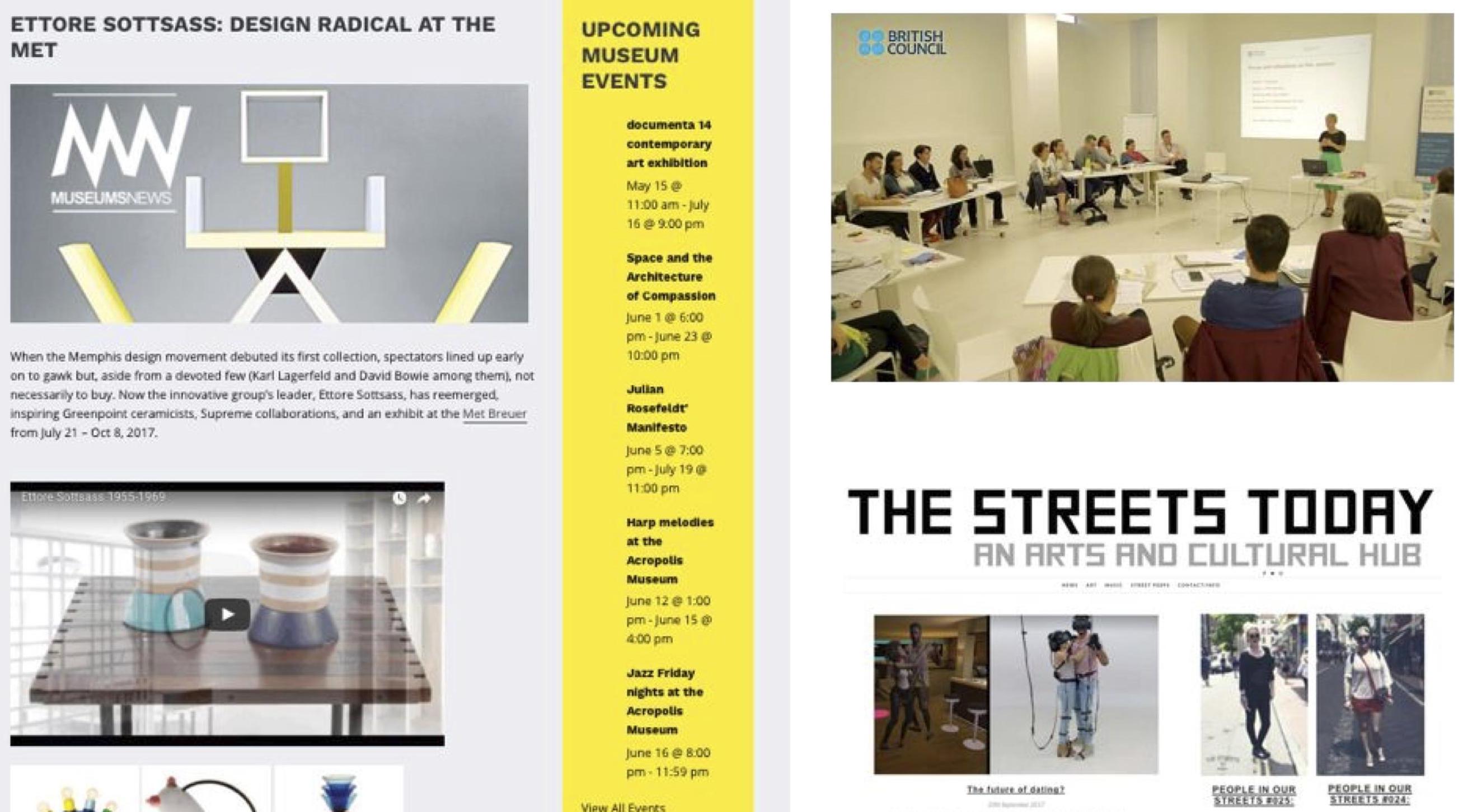 My career began in Melbourne, Australia, where I was born and grew up in. I started self-publishing in Melbourne at a very young age. Having moved to Athens, Greece, in the early-2000s I became an integral motivator of the new wave of comics art, by self-publishing my own anthology, Tales of Unsurpassed Vanity and creating a group anthology, Subart Comics. 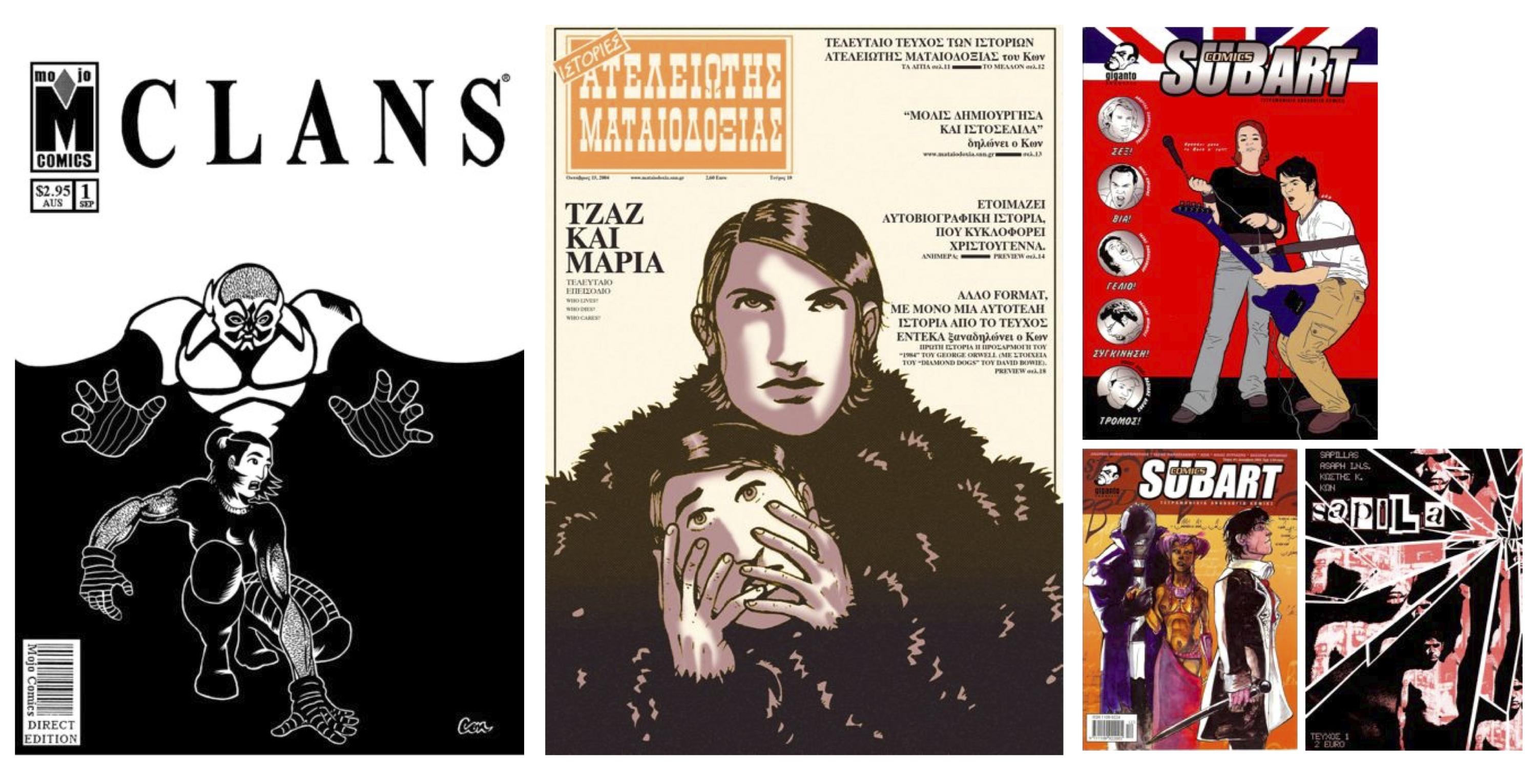 From 2003 onwards I participated in the two major Greek comics magazines Babel and the popular and highly influential anthology 9/ Ennea, which was a weekly supplement in the newspaper Eleftherotypia.

My experiments in biographical and autobiographical narratives, regarding the sociocultural climate in Athens in the early-’00s, began in earnest with the weekly publication of my Autobio Comics in the Greek newspaper Paraskevi+13.
By 2008 I was also working as a comics journalist for Big Fish magazine, a supplement in Greece’s biggest selling Sunday newspaper, Proto Thema. 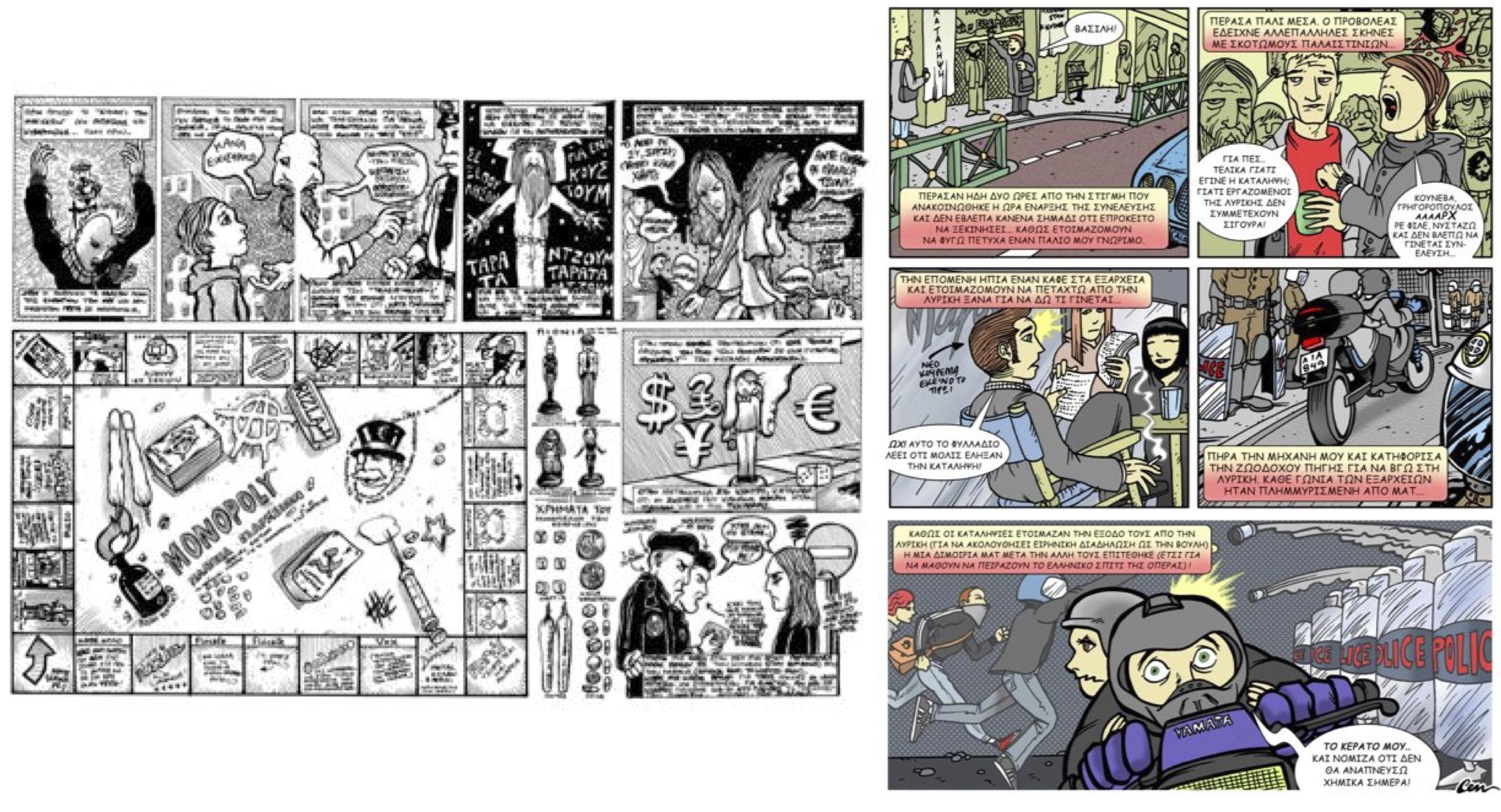 By the mid-’00s my work was being noticed by the mainstream and independent press in Greece with TimeOut magazine naming me a ‘Power 20’ in their creative arts special.

The comic that made me a ‘household name’ in the Greek comics scene, Giant-Size Fascists, and its sequel received the Comic of the Year and People’s Choice Awards in 2008 and 2010 respectively. I subsequently became a regular collaborator of Galera magazine. 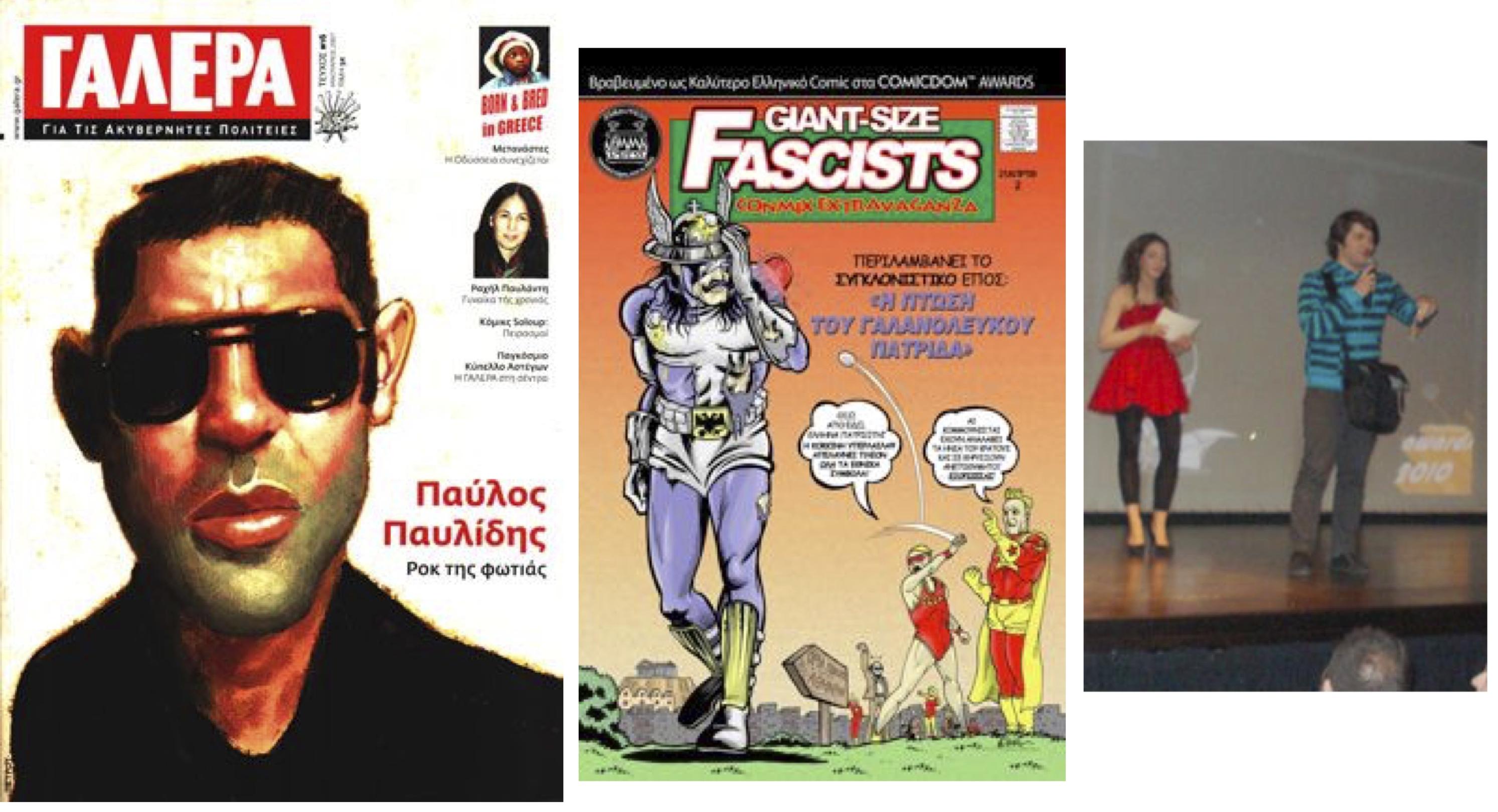 In 2010 I decided to incorporate film theory into my graphic novel output by working with the three-act structure and the Stanislavski method for the first time. The first graphic novel was Dryland in which I recorded and dramatised my family’s oral history about the untimely deaths of my ancestors in Interwar Greece.

The initial chapter was a finalist at Myriad Editions’ First Graphic Novel competition in Brighton, UK, in 2012. The entire 144-page graphic novel was eventually published in 2016 by the UK-based publisher Markosia Enterprises. Dryland drew publicity from Greek and Greek-Australian press, due to the underrepresented region of Xiromero being showcased for the first time in a visual narrative. 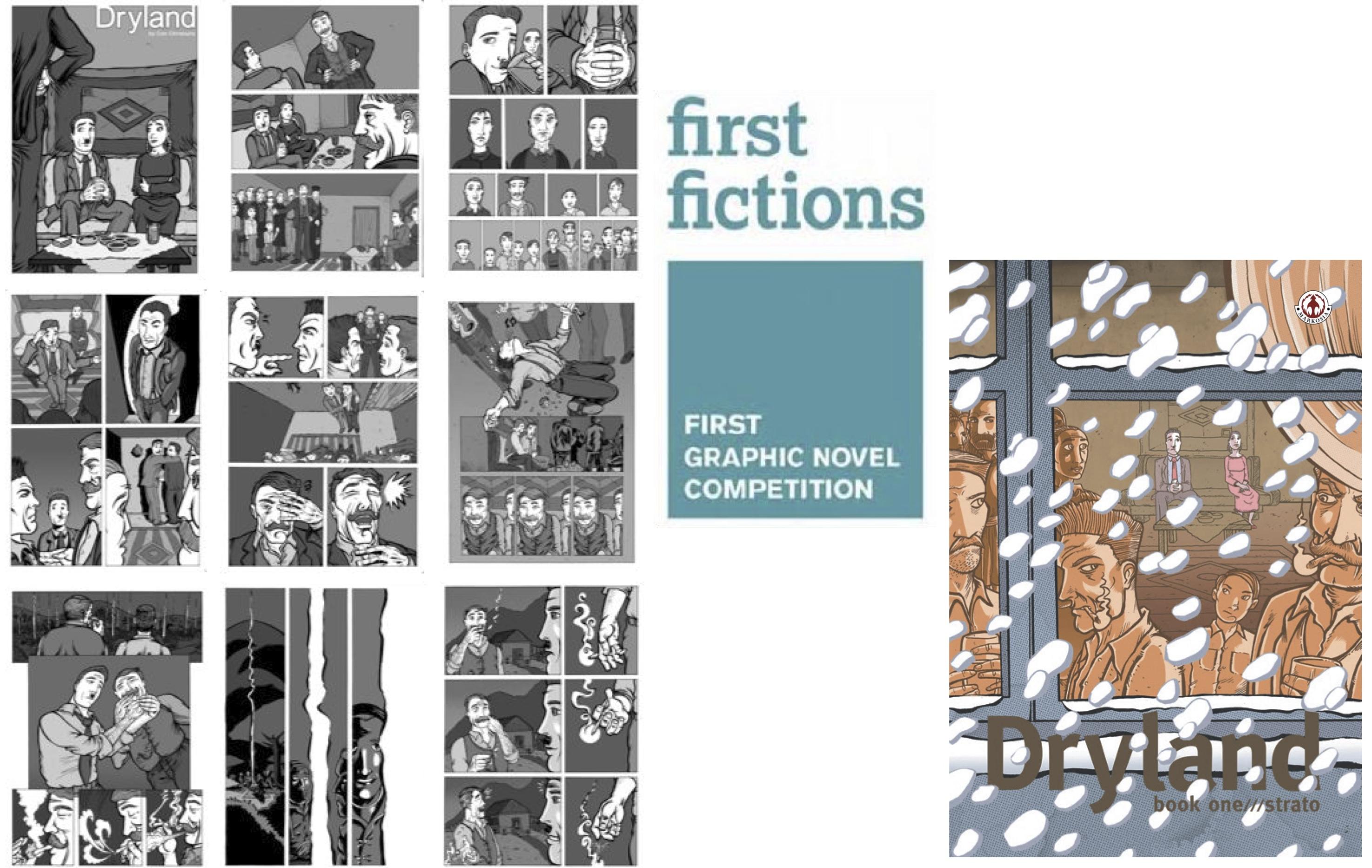 From September 2012 until March 2020, Socomic.gr, a website that funded Greek comics creators, agreed to fund and host a serialised comics series that I would create. During those eight years I focused my research and output on creating graphic biographies. SoComic.gr hosted the daily webcomic Tales of The Smiths (2012-2014), focusing on 1970s Manchester and the early lives of the seminal indie band, the Smiths, the continuation of Dryland Book One (2015-2016) as a biweekly webcomic, and the weekly webcomic Rebel Rebel (2016-2020), detailing David Bowie’s entire life. 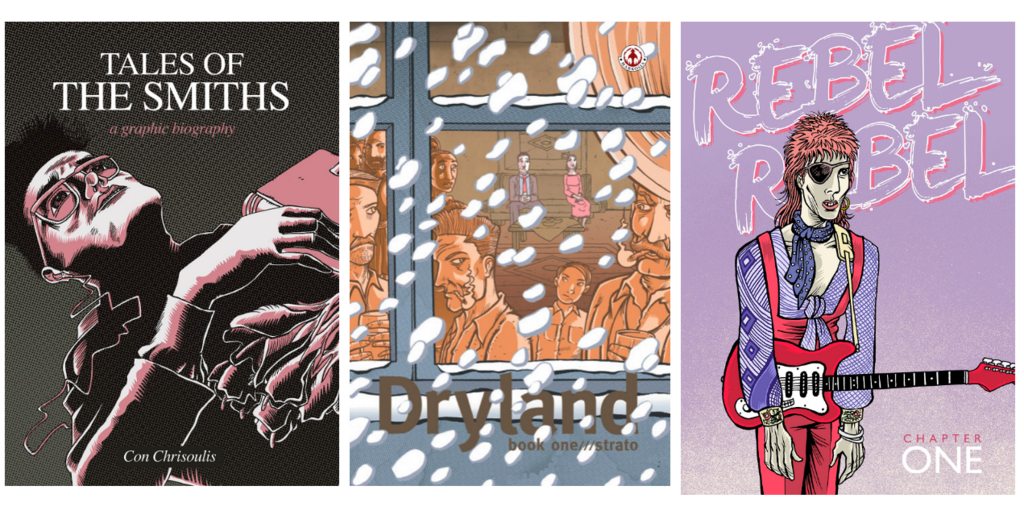 In March 2018 the London-based major music publisher Omnibus Press published and distributed worldwide a 440-page collection of Tales of the Smiths. 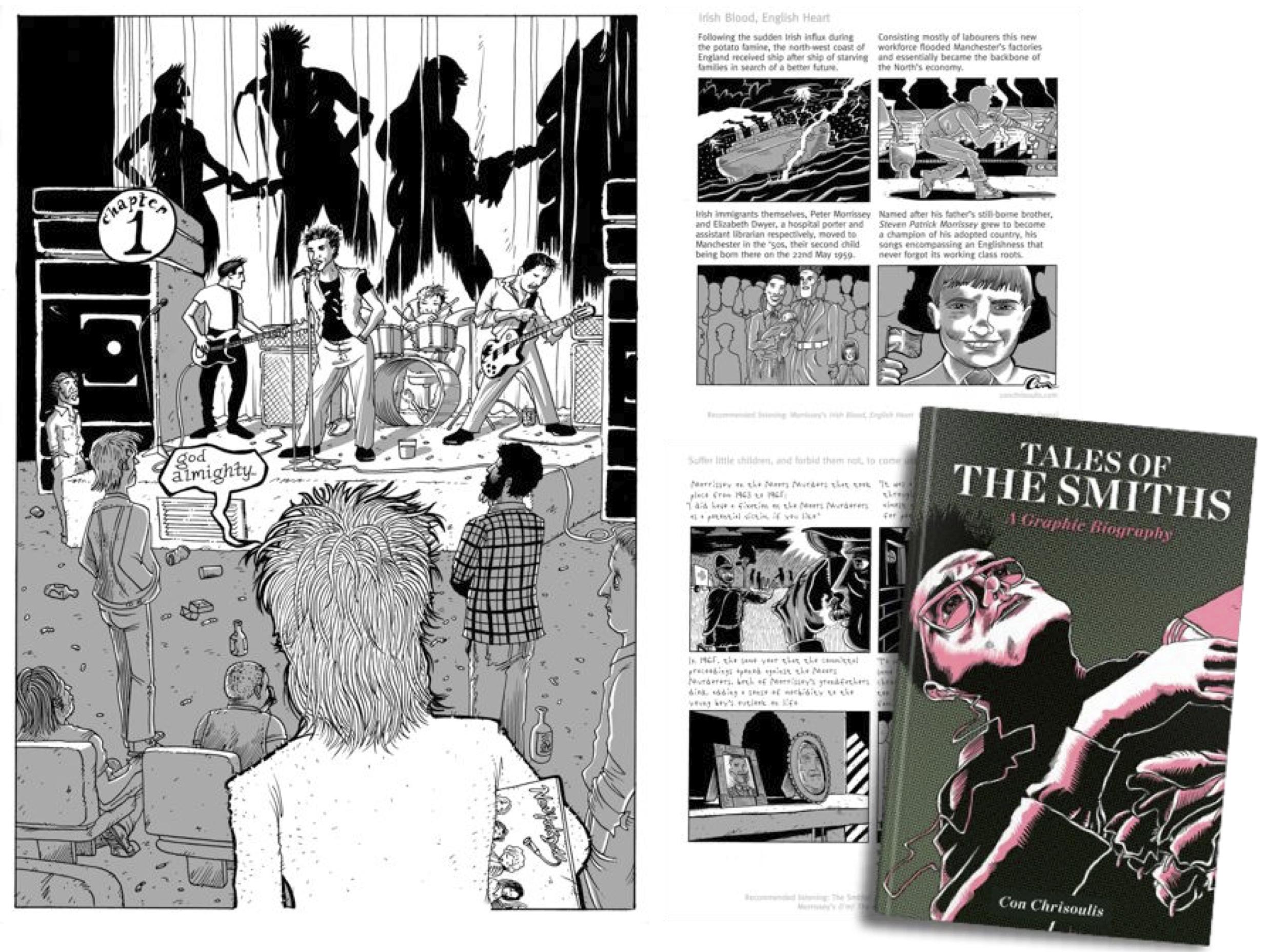 Due its historical, ethnographical and sociological research, the band’s place in indie music history and the Smiths’ fan base, both the webcomic and the subsequent publication by Omnibus Press of Tales of the Smiths drew worldwide publicity from the music and culture press (from Pitchfork to MTV and from Esquire to Rolling Stone). 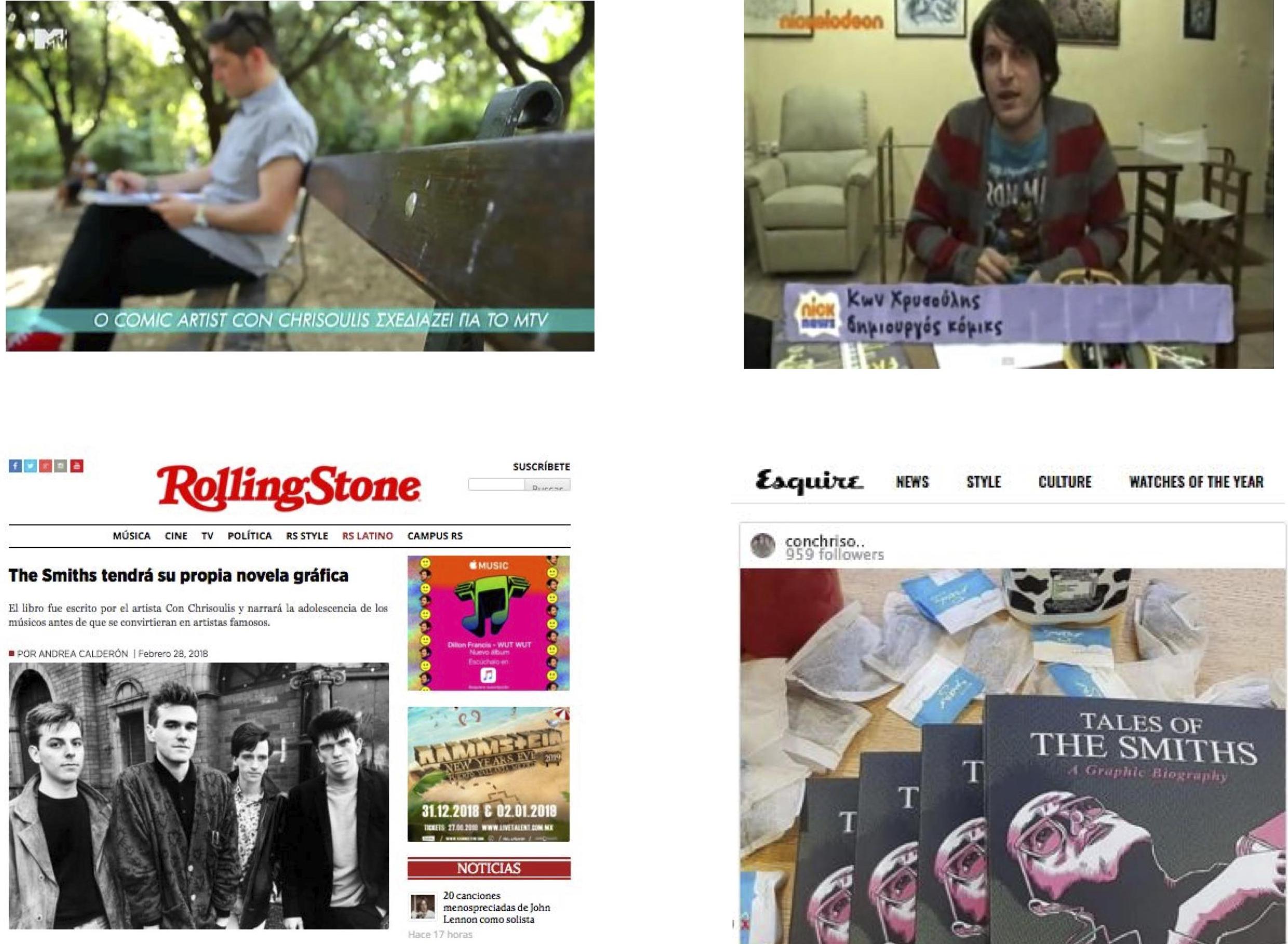 In 2014, a solo exhibition focused on Tales of The Smiths was organised in the centre of Athens, Greece, co-organised by Horostasion and Popaganda magazine. The exhibition drew large crowds and showcased original art from the development of the graphic novel.

My current artistic output focuses on Rebel Rebel and King.
King, the graphic biography of Jack Kirby, the understated creator of the Marvel Universe, has unveiled the issues that Ashkenazi Jews faced in Europe and the hardship they had to endure as immigrants in New York following Adolf Hitlerʼs rise to power in 1930s Germany. King showcases the backdrop that led to Kirby, and his fellow young Jewish New Yorkers, to create the first superheroes. 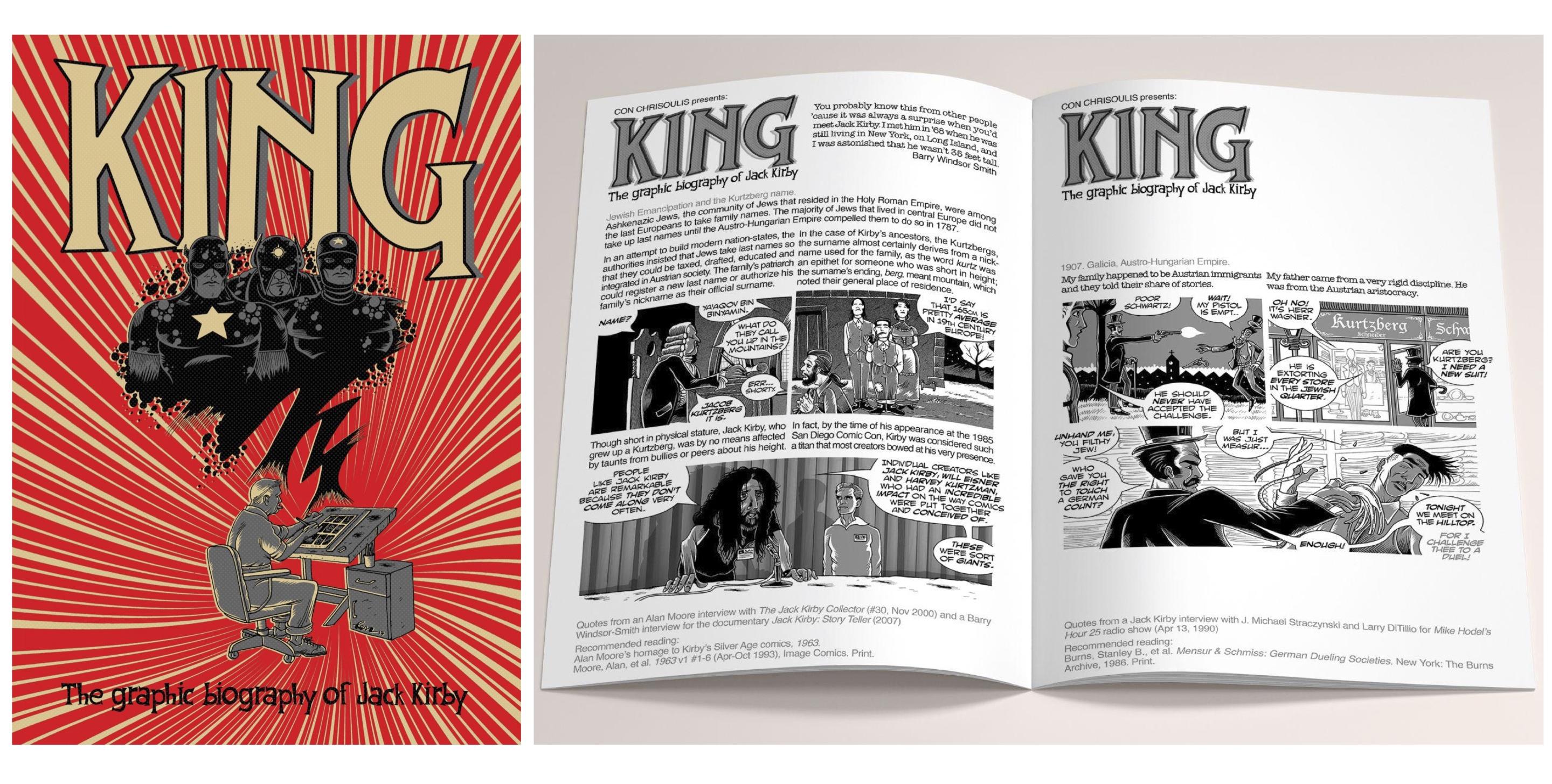 Rebel Rebel is an ongoing project which began in 2016 and through which I have been researching and narrating David Bowie’s entire life, his initial efforts in songwriting, as well as the historical events, artists and movements that influenced his later output. As a prominent pop culture figure, who challenged the public’s perception about male gender and sexuality, Bowieʼs sociocultural impact is brought to light in the graphic novel biography, adding to the body of work in studies that identify and address issues affecting diversity. At 290 episodes (by May 2021), the series has at present narrated the years 1947-1967 and is now hosted on Patreon, a crowdfunding platform, which is supported by the Bowie fan community.

A comprehensive list of all published work can be provided on request.

Illustrator/Graphic Designer for The International Federation of Red Cross and Red Crescent Societies’ communication needs with the refugee crisis. 2016-2017.

2019
University of Brighton
Paper Title: The Making of Rebel Rebel, the Graphic Biography of David Bowie
Conference: Forever Stardust: An Evening Celebrating the Art and the Music of David Bowie (July 12, 2019)
Information: http://blogs.brighton.ac.uk/davidbowienight/speakers_and_contributors/

A comprehensive list of press references can be provided on request.

2019
Zsolt, D. (2019). Tales of The Smiths featured in article due to references to The Smiths’ first demo. Open Radio, 2 January.
Available at: http://openairradio.hu/a-smiths-legelso-studiodemoja-1982-bol/

2018
Eastaugh, D. (2018). Radio interview on Tales of The Smiths for the Platform show. Future Radio, 21 March.
Available at: https://www.youtube.com/watch?v=oG0Q0fvdZzE

2012
Arrant, C. (2012). ‘Smiths-lovers of the world, unite and take notice of Tales of the Smiths’. Comic Book Resources, 5 October.
Available at: https://www.cbr.com/smiths-lovers-of-the-world-unite-and-take-notice-of-tales-of-the-smiths/